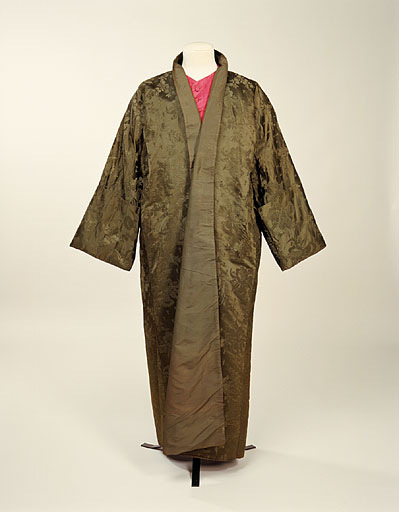 Loose banyan, cut as a kimono, in dark green silk damask, lined dark green twilled silk fronts each in one section, slightly flared with join at sides towards hem, front edges straight, front sections continuing over shoulders to form two back sections, slightly flared with join at sides towards hem, rectangular section inserted at back of neck, forming standing collar at back, long loose sleeves cut in one with front and back, with join below shoulder, wide turn back cuffs. Belonged to Thomas Carill-Worsley, 1739 - 1808, lived at Platt Hall 1759 - 1808.

Banyans were also known as morning gowns or nightgowns, and originated as Indian imports for male informal wear, not night attire. Gowns could be fitted like coats or very loose based on a kimono-shape, like this leaf green silk damask example of about 1780 which belonged to Thomas Carill-Worsley of Platt Hall. Such a garment would have been put on instead of the fitted coat, over the shirt, waistcoat and breeches, for relaxing at home and would have been worn with a cap to cover the wig-less head. Sometimes men would also potter outside in banyans, as did the famous diarist, Parson Woodforde, who was embarrassed when seen by fashionable neighbours in 1781 "caught on the hop, busy in my garden, and dressed in my cotton morning gown, old wigg and Hat". More typically, men wore their banyans to entertain friends indoors, playing cards, taking tea, drinking wine or smoking. In semi-public, men were more likely to wear a fitted banyan like the Indian painted cotton example shown below, and incorporating waistcoat fronts so that it could be worn directly over the shirt. Informal gowns were worn well into the nineteenth century, usually in printed cotton calico, and often with a practical dark ground as in the other example pictured below, from the 1820s, with a busy floral and stylised geometric print. Such gowns have developed into the modern dressing gown (see black and white image from a shop catalogue below), worn for warmth over nightwear, and not intended for such semi-public use.