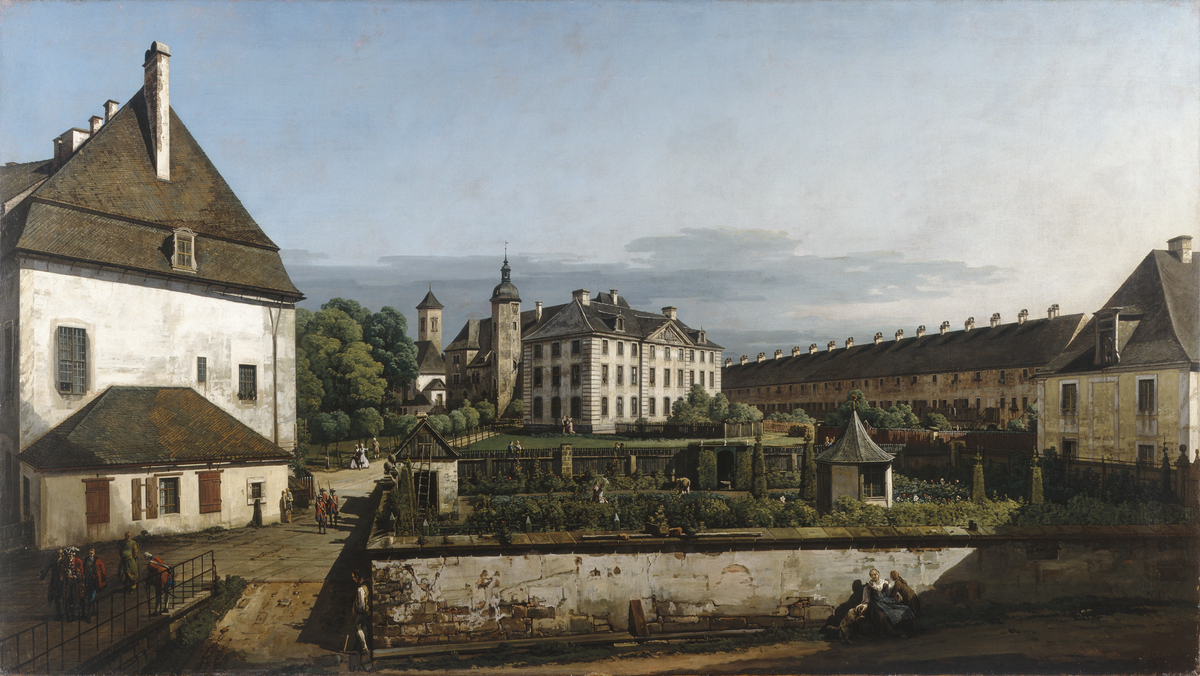 Königstein is an ancient fortress on a rocky hilltop near Dresden, Germany. Bellotto was commissioned to record it, in five different views of identical size, by Augustus III, King of Poland and Elector of Saxony as a part of a record of his estates. The buildings seen in this view from the west are the Georgenburg on the left, the Brunnenhaus in the centre background and the Old Arsenal on the right; the Brunnenhaus surrounds a 500 foot well sunk during the 1500s. In the foreground there is a fine walled garden with topiary obelisks and a small pagoda. Bellotto's superb architectural record is enlivened by people associated with the estate going about their daily lives. The Magdalenenburg housed courtiers, supplies and, in Augustus's time, a cellar of 60,000 gallon casks of wine. Bellotto was a nephew and pupil of the celebrated Venetian view painter Canaletto. He often signed his pictures 'Il Canaletto' to draw attention to his lineage, but the addition of more naturalistic details and cooler tones distinguishes his work from that of his uncle.

Grand Tour and Grand Style The Influence of Travel Improvements in European travel during the 1700s had a wide-ranging impact on British culture. A particularly significant influence was the Grand Tour, which became almost obligatory for young gentlemen. Grand Tourists were led across Europe by tutors to study art, history and politics for two or three years. The Grand Tour focused on Italy, particularly Rome, and often incorporated new archaeological sites such as those at Herculaneum and Pompei, near Naples. Ancient antiquities were heavily trafficked across Europe and continental works of art flooded into Britain. A period of especially active collecting took place between the end of the Seven Years War in 1763 and the rise of Napoleon in the 1790s. As more artists and designers also visited the continent their work became increasingly informed by travel. The serious themes of classical antiquity and European art led to a new departure in painting called the Grand Style. This championed classical, historical or literary subjects, and inspired radical changes in portraiture and landscape. Widespread interest in Greek and Roman remains also fostered fresh interpretations of ancient designs by pioneers of decorative art such as Josiah Wedgwood.