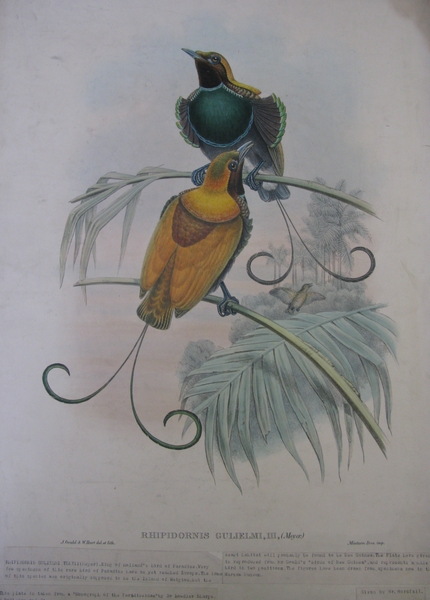 Two exotic and vibrantly coloured birds perch on two seperate branches looking upwards towards a pale blue sky. One bird is predominently orange, the other predominently green, while both have two long, curly tails each protruding from their lower feathers. There is a bird in flight just visible in the background, travelling upwards in the direction of the forest. This hand-coloured lithograph is from Monograph of the Paradiseidae (or Birds of Paradise) by Richard Bowdler Sharpe. It was the first monograph devoted to birds of paradise. It was published in London by Taylor & Francis for Henry Sotheran & Co. between 1891-1898. The original idea was that of John Gould's but it was completed by Sharpe after Gould's death. The plate was origianlly drawn by John Gould and completed by William Matthew Hart. The birds depicted are also referred to as the King of Holland's bird of paradise or King William III's bird of paradise. There is an example of this hybrid bird at the Manchester Museum.

Monograph of the Paradiseidae; King Bird of Paradise