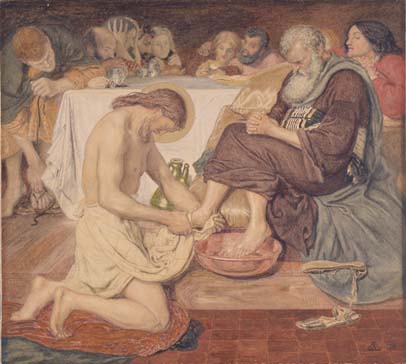 Interior scene. In the foreground, left, Jesus kneels on a piece of red cloth before Peter, who is seated on the right. He is washing Peter's feet, which rest in a bowl, and drying them with a light coloured cloth which he wears around his waist, his only item of clothing. Jesus' head, surrounded by a halo, is bent down, as he is focused on his task. Peter also looks downwards, his hands clasped in his lap, his shoes on the floor next to him. Various other figures are seated around a large table behind them, watching the scene. A man on the far left leans down to take off his shoes.