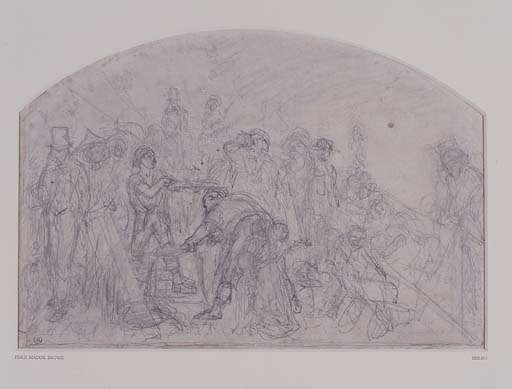 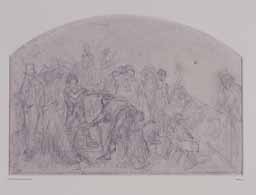 Compostional drawing of street scene. In centre men are working on the road, with figures passing by on the left, and other figures behind and on the right. A man leans on the railings on the right, the artist has tried him in both a bowler and a top hat. Two figures in the background are on horseback. On the left is another man in a top hat walking towards the viewer. verso: a black chalk drawing of a hand with the index finger extended. Inscribed FMB / 44

64 Study of Work probably painted 1864 but representing the earlier design Watercolour and pencil on paper These two studies show that Brown’s earliest idea for Work was different from the final painting. On the left is a dog-seller, a man in check trousers and top hat holding a dog under one arm. Brown later substituted the chickweed seller. On the right, where Carlyle and Maurice stand in the final painting, is a man contemplating the scene with bowed head, possibly smoking. This is a self portrait of Brown as an onlooker. Brown was asked to include Carlyle by the art patron Thomas Plint, who commissioned the unfinished painting in 1856. A devout Christian evangelist, Plint also asked Brown to show one of the rich ladies distributing tracts. Manchester City Galleries