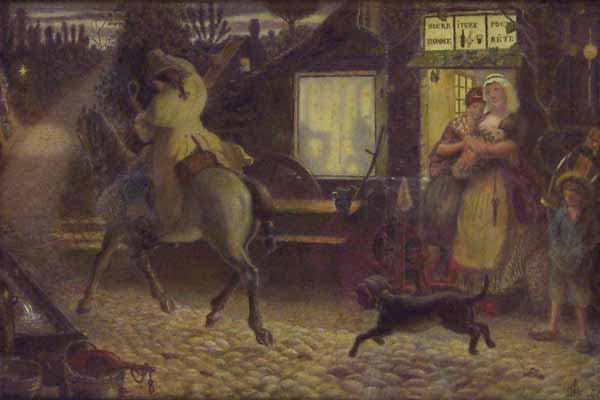 Night time scene outside a tavern with a male figure on horse back riding away to the left towards a road side shrine, with a black dog following closely behind. Two female figures stand in the doorway to the right, one holds a baby in her arms. A child wearing clogs stands to the right on the cobbled road. The silhouette of figures drinking can be seen through the blind of the brightly lit window to the left of the tavern door. Water pours out of a tap into a trough in the foreground to the left.

86 The Traveller 1868, 1884 Oil on panel A lonely night-time traveller and his dog ride past an inn. Ignoring the hostess with her children, the illuminated windows and the promise of food and drink, he rides on, lured on by a will-o-the-wisp lighting up a wayside shrine. The painting is based on a magazine illustration by Brown, inspired by A un passant, a poem by Victor Hugo. Manchester City Galleries