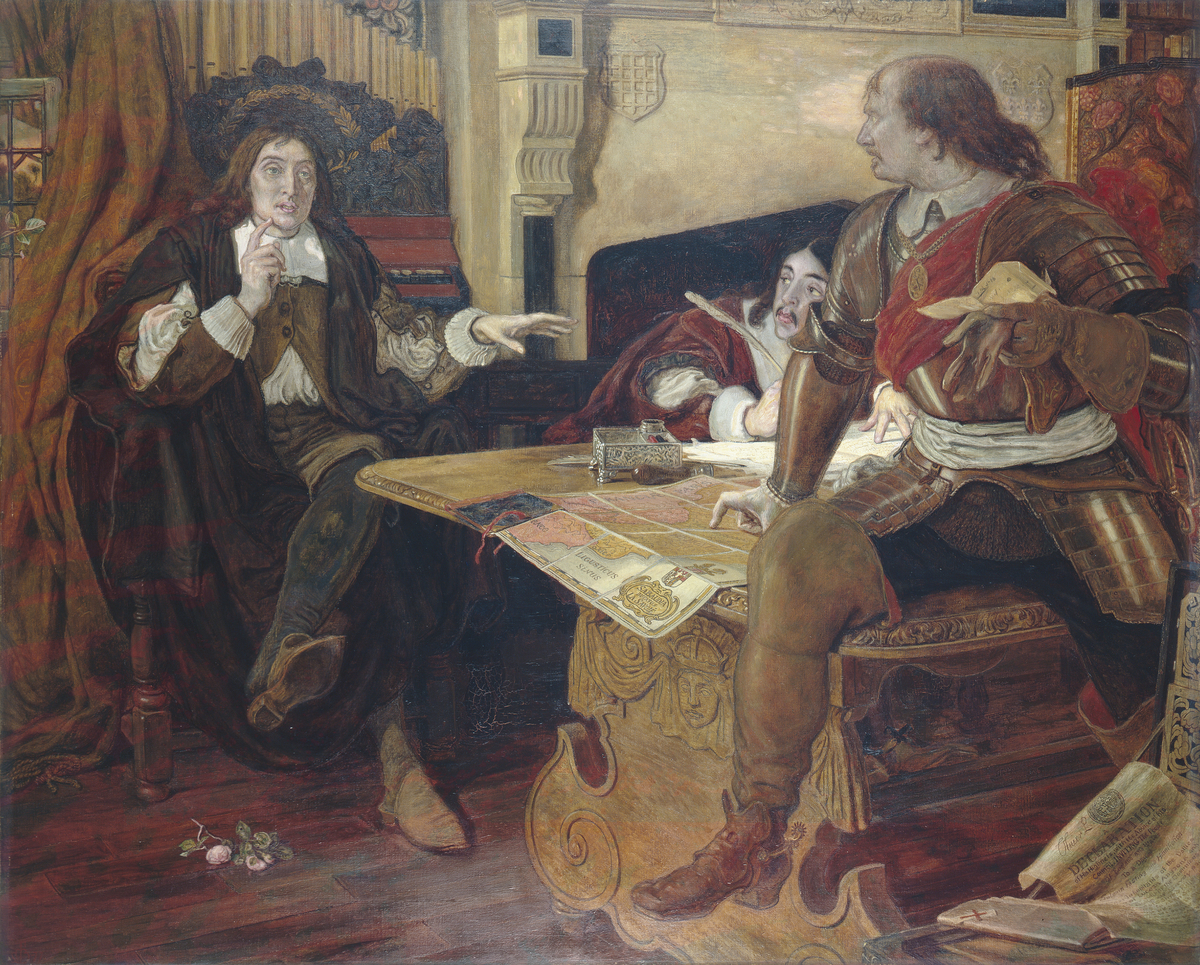 Interior scene depicting Oliver Cromwell (champion of the Protestant cause in Catholic Europe), John Milton (poet) and Andrew Marvell (poet and secretary), composing a letter to Louis XIV of France, protesting at the massacre of the Vaudois (Swiss) Protestants by the Duke of Savoy. Cromwell dictates his dispatch to Milton, who translates it into Latin for his secretary, Marvell. The scene takes place in Milton’s house. In the right foreground is Cromwell, dressed in armour and long boots, sitting on the edge of a heavy wooden table ornamented with carving. He is twisting round to face the other two figures behind him. In his left hand is a small sheet of paper and his right hand points at a map spread out on the table. Partially obscured by Cromwell's right arm is the figure of Marvell sitting in front of a large fireplace. He leans forward at the table, poised with quill in hand, his head turned to the left in the direction of Milton. In the left of the composition, seated with legs crossed and a hand raised to his face in thought, is the figure of the blind poet, Milton. There is an organ behind him and a rose sprig lies on the floor at his feet.

Cromwell, Protector of the Vaudois 1877 Ford Madox Brown 1821 - 1893 Oil on canvas In Brown's depiction of Oliver Cromwell he champions the Protestant cause in Catholic Europe. We see him dictating a letter to the Duke of Savoy to protest at his massacre of Swiss Protestants. The blind man on the left is the poet John Milton, who was then Latin Secretary to Cromwell. The scribe is Andrew Marvell, then Joint Secretary but now better known for his poetry. Brown carefully researched each of these portraits. Cromwell's role was reassessed by Victorian historians. His legacy of democratic government was appreciated when Victorian England remained politically stable whilst disruption and revolution rocked much of Europe. Presented by Lieutenant-Colonel H J Candlin 1901.12