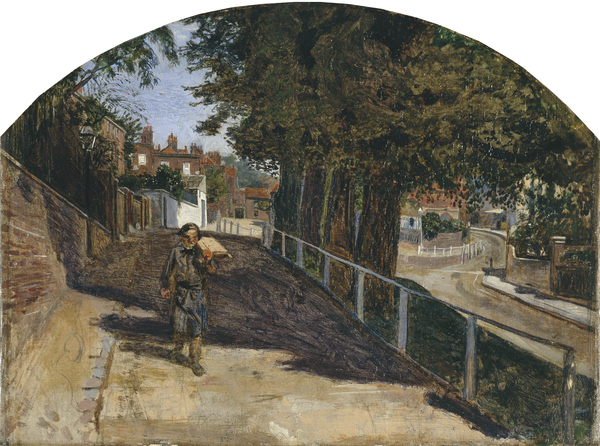 Scene of Heath Street, Hampstead on bright sunny day, viewed along its length. A brick wall is visible to the left of the road, with houses beyond in the distance. A fence runs along the street to the right, with a grassy verge running down to a parallel street below. A large thick oak tree can be seen in the centre of composition, casting a dark shadow across the street. A butcher's boy walks out of the shadow towards the viewer, carrying his wares.

62 The Mount and Heath Street, Hampstead 1852, 1855-56 Oil over pencil on canvas The navvies that Brown saw were digging up the raised part of the street, known as the Mount. Brown painted this study there in the summer of 1852. Not long after, he began the full-size painting. The butcher’s delivery boy was a later addition. Manchester City Galleries