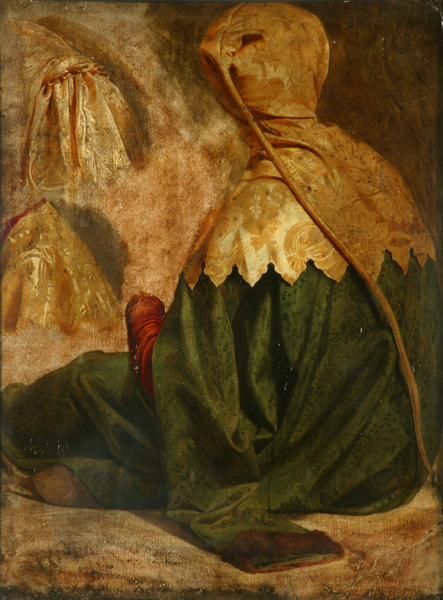 Close up study of a courtier for 'Chaucer at the Court of Edward III'. The figure is seated on the floor and viewed from the back; he is dressed in a medieval jester's costume in green and a yellow hood. Detail is focussed on the courtier's left shoulder and costume sleeve, which is draped on the floor behind.

35 Study for Sir John Froissart 1847 Oil on millboard A study for the man in the bottom right corner of Chaucer. Most of the people in the painting represent real historical characters. Froissart was a French historian who was known to have been at the English court. In the painting he is shown writing, but is distracted by his neighbour, the poet Gower, who is speaking to him. Similarly, many of the people in the picture are not paying attention to Chaucer’s reading; this typifies Brown’s concern to bring realism and humour into history painting, revitalising an outdated art form. In order to achieve historical accuracy, Brown bought some yellow brocade. He had it made up into the hood, which was copied from a book on historical costume. Manchester City Galleries