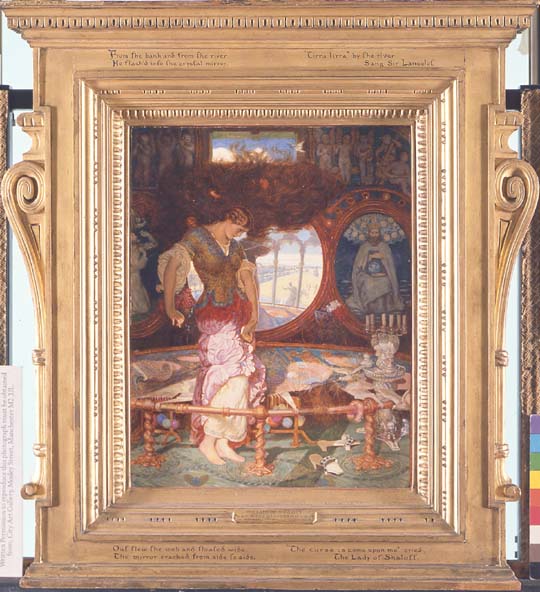 A depiction of the chaos which ensues after the Lady of Shalott has looked directly at Sir Launcelot. The Lady stands in her chamber within a circular loom. The partly finished web is disintegrating, entangling the weaver. The Lady stands on the left, dressed in a feather-textured bodice over a cream chemise and pink ruched skirt. Her long thick auburn hair has been blown high above her head by the turmoil in the room, which has also caused doves to fly from their nests. Her wooden shoes lie discarded on the ground in front of her. There is a floor-standing, silver, six branch candlestick on the right. On the wall behind her is a mirror reflecting the tapestry she is weaving and Sir Launcelot. Two smaller ovals flank the central mirror, the right hand oval containing an image of a bearded man seated with a globe in his hands. This represents Christ in Majesty. The left oval has an image of a kneeling man: this is Christ experiencing the Agony in the Garden. Above the ovals is a border of cherubs on the left and the right. The painting has a decorative gilt frame with a scrolling feature on the sides and top, with an inscription of 8 lines from Tennyson's poem The Lady of Shalott at the top and bottom.