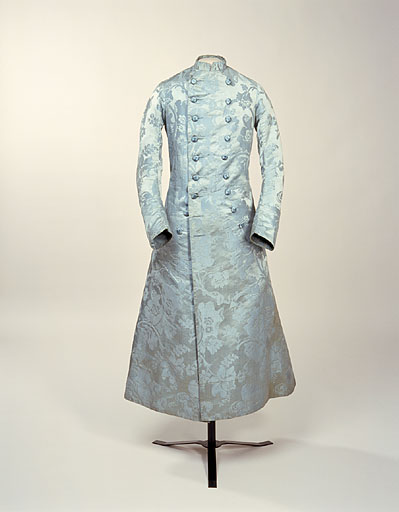 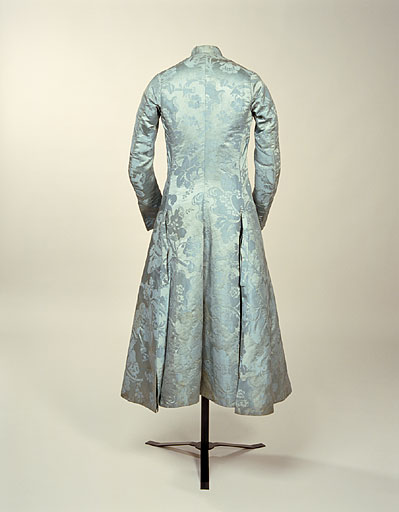 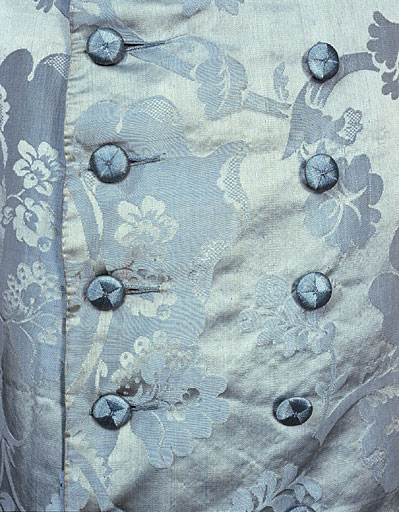 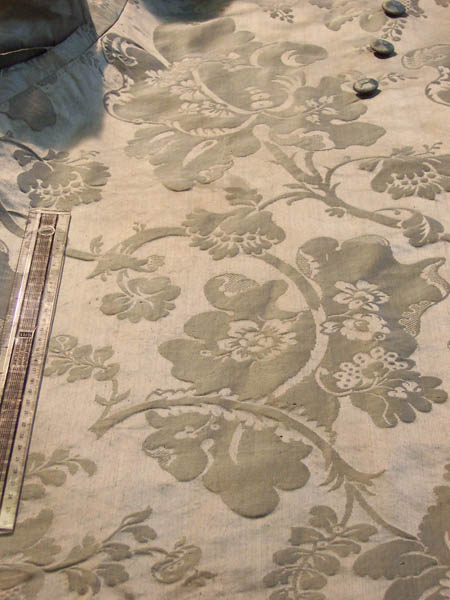 Gown - light blue silk damask lined blue silk, gown interlined flannel, standing collar, double breasted, mid-calf length, fastening with 9 silk thread covered buttons (?Macclesfield) with buttonholes each side, front edge straight, buttons curving to side at hip, back in two sections seamed to few inches from hem, pocket, blue glazed linen, in each side seam below hip with slit behind it, both concealed by narrow shaped flap attached to front edge of front section, sleeves in two section with turned back cuffs in two sections. Separate waistcoat - round neck with very narrow band, fastening with 13 smaller buttons, skirt cut away at front below waist, flared at sides, side seams open below waist, pocket, blue glazed linen, with shaped flap at hip each side, back above waist, blue glazed linen.

For centuries, the waistcoat was one of the chief areas for decoration in men's dress. During the eighteenth century, waistcoats often matched the coat or jacket and the breeches, either in fabrics like silk brocades, damasks or velvets, or in embroidered decoration in court suits. The main image shows a sky blue silk damask waistcoat which was made of the same fabric as a banyan or gown, and worn as an outfit. By the later eighteenth century waistcoats shortened and ended in a horizontal line at the waist. New fabrics like cotton became fashionable, often embroidered in stylised neo-classical designs. During the nineteenth century, the waistcoat if anything became more of a focus for attention, with the vibrant damasks and brocades contrasting with the increasingly dark, plain and sober cloth suits. Today, 2-piece suits are popular, and it is more often the jazzy tie which lifts the monochrome tone of the outer fabric, and which reveals a little of the character of the wearer.