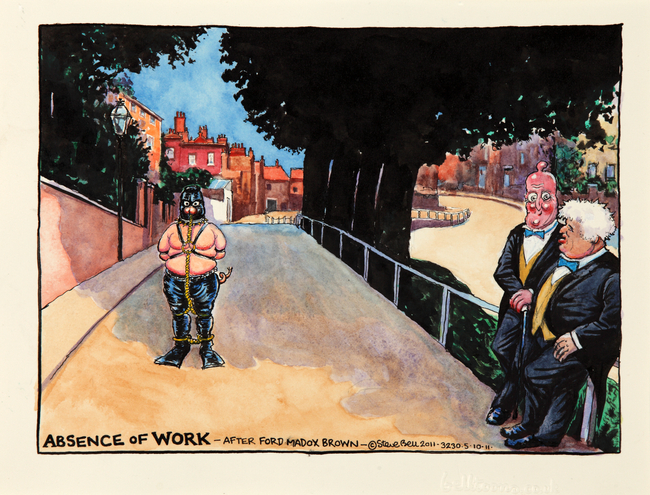 This cartoon shows the Prime Minister, David Cameron, and Mayor of London, Boris Johnson, dressed in Bullingdon Club dress leaning against a railing observing the Chancellor, George Osborne, who is dressed in fetish gear. The image is a reworking of Ford Madox Brown's painting Work (1852-65) which is in Manchester Art Gallery's collection. The street is Heath Street in Hampstead and Cameron and Johnson mirror the figures of Thomas Carlyle and Frederick Denison Maurice in Brown's original painting. Osborne takes the place of the hard-working labourers digging the road in Work. The cartoon was produced in response to the 2011 Conservative Pary Conference in Manchester (which the artist Steve Bell attended) where Boris Johnson announced that the unemployed risk losing benefit unless they spend several hours a day looking for work and are prepared to accept jobs within a 90 minute radius. As a result of this Bell turned "to Manchester City (sic) Art Gallery and Pre-Raphaelite painter Ford Madox Brown for a spot of colourful inspiration" (Guardian website). The cartoon was published in the Guardian on 5 October 2011.