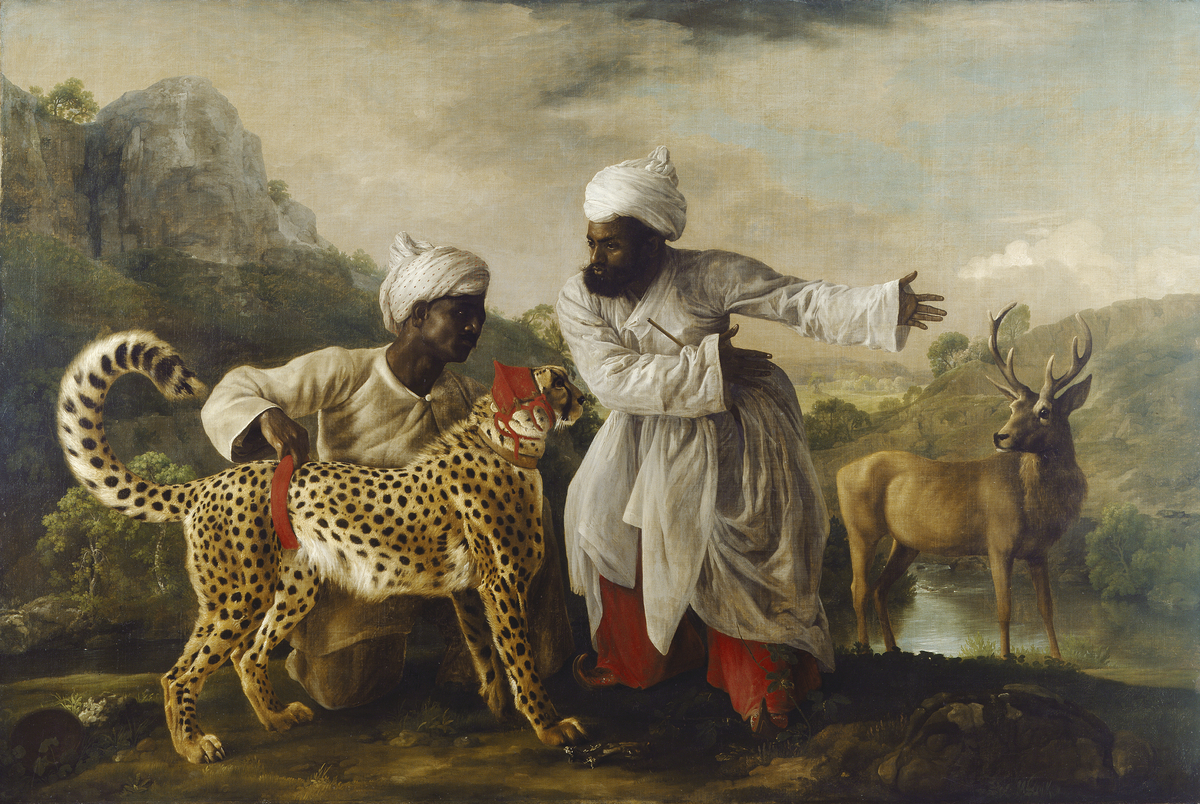 The female cheetah, seen in profile to the right, wears a collar, a red hood and a red belt harness tied around her abdomen; kneeling to the far side of the cheetah is one of the male figures, wearing a white robe with a single button at the neck and a turban of spotted white fabric, restraining the animal by its belt; he turns his head to the right, looking towards where the second male figure is gesturing. This figure, also with a white robe, worn over a pair of red trousers, and red shoes with curled-up toes, has a plain white turban. He looks in the direction of the cheetah and gestures with both hands towards a stag standing behind him on the right. The stag turns its head towards the cheetah; both animals stare at one another. There is an anatomical disparity between the stag’s body, which is based on that of a British red deer, and its antlers, painted from those of an Indian sambar. The scene is depicted on a plateau within an imaginary landscape, said to resemble the scenery around Matlock in Derbyshire; to the left are dramatic cliffs atop a grassy slope, to the right, below the stag, is a river, which draws the eye into a landscape of woodland and undulating hills; the sky shows glimpses of blue through a bank of stormy clouds. This painting was commissioned by Lord Pigot of Patshull who had brought a cheetah to England from Madras, India where he had served as Governor. The painting shows the Indian method of hunting with cheetahs at the moment the keepers are about to release her. It is thought to have been inspired by an incident in 1764 when the Duke of Cumberland staged a hunting display at Windsor Great Park that saw a cheetah releashed into an enclosure to hunt a deer. The deer tossed the cheetah from the enclosure and she escaped into the Park.

Gallery text panel Face and Place Portraiture and Landscape in the 18th Century A dramatic growth in Britain's wealth during the 1700s brought about an increased demand for art and design. Hundreds of grand houses were built or improved and many were filled with impressive private collections. The prominent display of paintings and decorative arts demonstrated their owners' status and taste. Portraiture became particularly fashionable, leading to rising numbers of 'face painters' and to an increase in the quality of their work. The ability to capture a likeness was most important but artists could also enhance a sitter's image with qualities such as prestige, wisdom or power. New public exhibitions gave artists a shop window and the Royal Academy, founded in 1768, organised the most important annual show. Amid this developing climate of enthusiasm for art, landscape painting also began its remarkable evolution. Landscape arose from a need to accurately record views and was first thought to be of little artistic merit. But as painters grew in confidence during the later 1700s it was treated with more creativity and seriousness, establishing a distinctive tradition in British art.