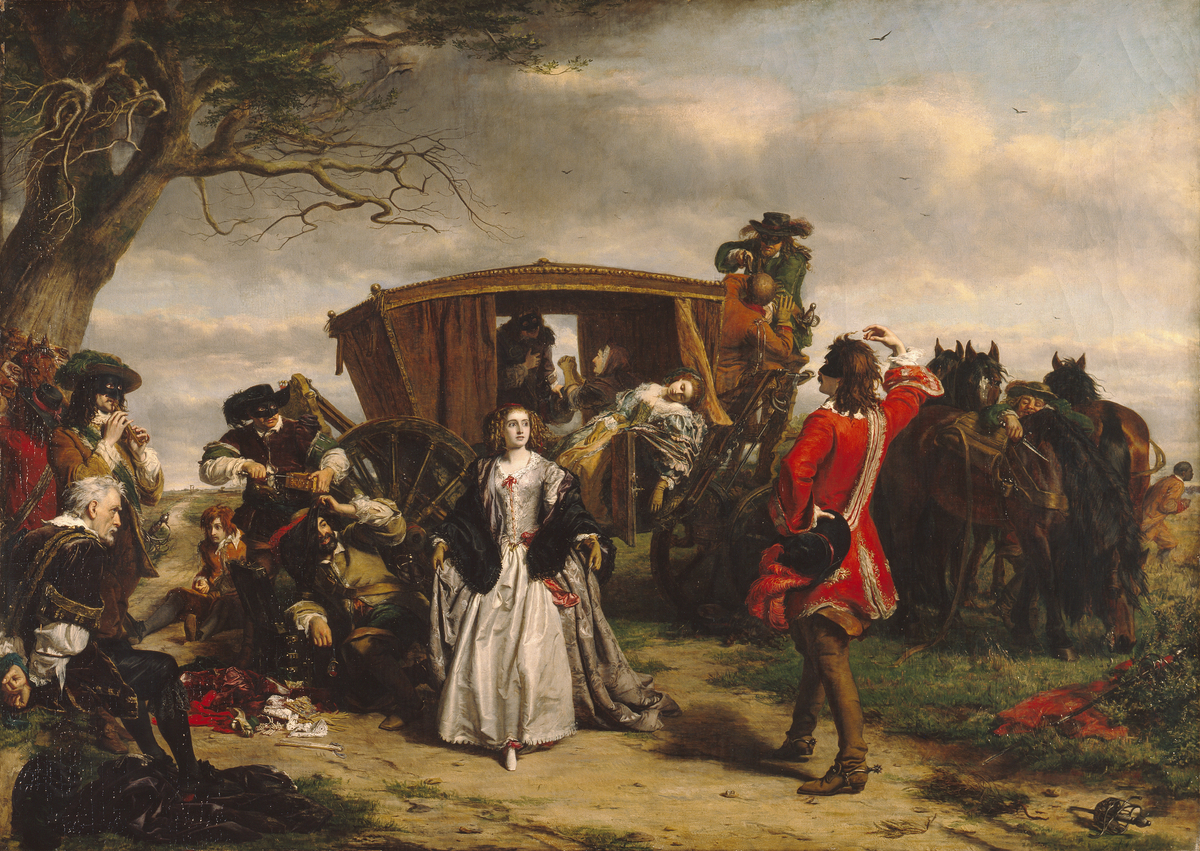 Scene depicting a group of highwaymen holding up the carriage of Lady Aurora Sydney carrying a young woman who has been made to dance with the captain of the band of men, Claude Duval, as part of her ransom. The event takes place on a bleak heathland road under a cloudy sky. In the centre of the composition are the dancing figures of captor and hostage: he stands masked, with his right arm raised, his left hand (holding a feathered cap) placed on his hip and his right foot pointed forward, facing away from the viewer; she stands forward-facing, holding her skirts out to the side, with her left foot pointed forward, an alarmed expression on her face. Behind them is the carriage containing the slumped figure of a young woman who has fainted and that of an old woman pleading with a highwayman; the driver of the coach has a pistol pointed at his head as one of the men cuts the harnesses of the coach-horses, to the right. Crouching near to the rear wheel of the coach, a highway man pauses from emptying the travellers' possessions from a chest to take a bemused look at the dancers; another stands behind him prising open a small case with a knife. To the left of the composition, beneath a tree, is the standing figure of a highwayman playing a pipe or whistle to provide music for the dancers, with the elderly figure of a male hostage seated on a rock beside him, his hands tied behind his back as he watches the scene.

Claude Duval 1859 - 60 William Powell Frith 1819 - 1909 Oil on canvas Claude Duval was a famous highwayman during the reign of Charles 11. Frith paints one of Duval's mocking acts of chivalry. Holding up a coach, he offered to forfeit the loot if a beautiful female passenger would dance with him. The gallows in the distance foretell his death. Frith went to great pains to achieve historic accuracy, consulting experts on costume and dance. Ultimately though, the drama was most important. He wrote: 'I thought if I could succeed in retaining the beauty of the lady combined with the terror she would feel, I should perform a feat well worthy of achievement'. James Gresham Bequest 1917.270

Mme Jourdain discovers her husband at the dinner which he gave to the...