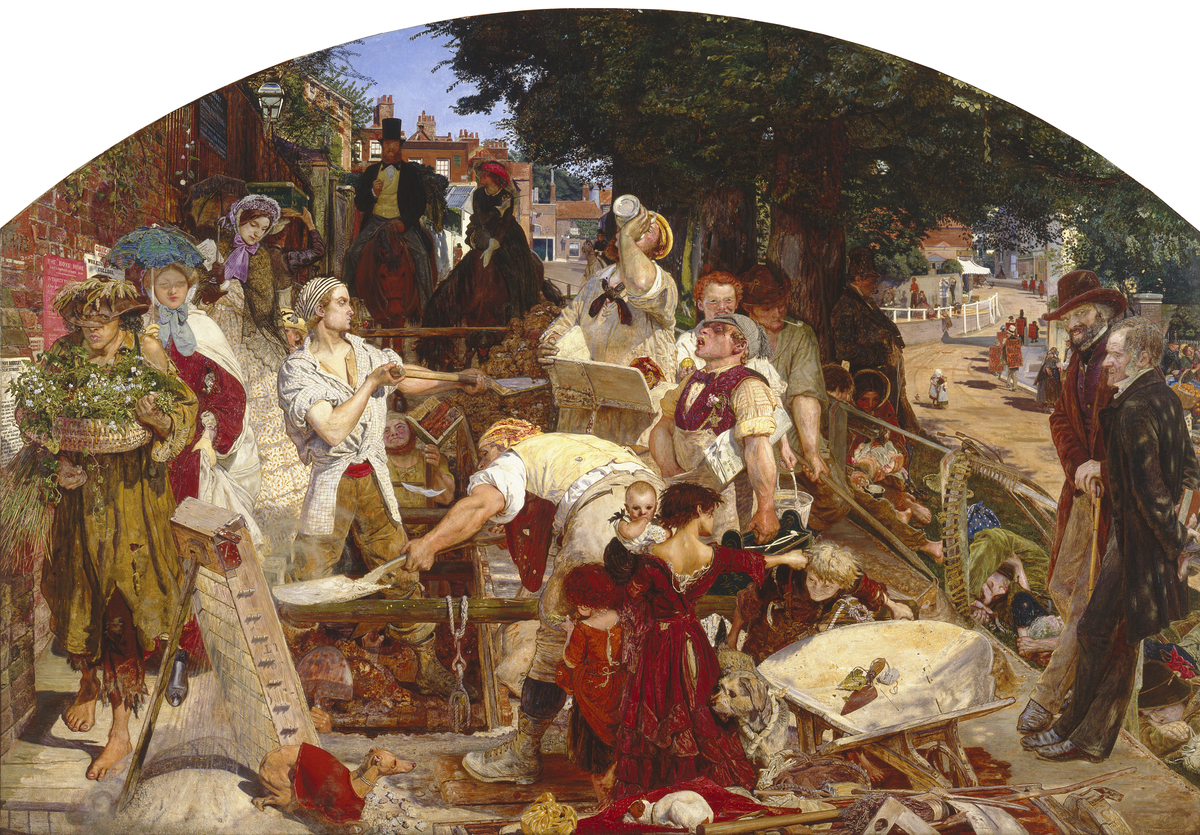 Street scene with arched top, representing aspects of work. In the centre, a group of navvies are digging up the road, one is carrying bricks, another drinking beer, while others shovel the earth dug up by their workmates below into a pile on the surface. In front of them, a young girl with tousled hair and a ragged red, velvet dress looks after three children; a baby in her arms, a small girl at her side, and boy to the right, whose refusal to leave the workmen's wheelbarrow alone has forced the young girl to pull him away by his hair. A mongrel dog at her feet faces a well groomed greyhound, dressed in a red cape, opposite, a third dog lies down between them. To the left, walking to the side of navvies, a ragged flower seller holding a large basket of plants makes his way towards the viewer. He looks suspiciously to the right, his eyes visible through a tear in the brim of his hat. A wealthy lady with blue parasol walks behind him, with an older lady, more soberly dressed, distributing pamphlets behind her. Behind this group a baker, just visible, walks away from the viewer, carrying a tray of pastries on his head. Behind the navvies, a wealthy middle-aged gentleman and his daughter sit on horseback, their path blocked by the roadworks. To the far right, two intellectual men lean against the fence at the side of the road. Behind them a steep grassy bank runs down to a road below. Unemployed workers (haymakers) are sleeping at the top of the bank in the shade of a large tree. A couple feeding a baby sit close to the tree, a man wearing a top hat stands behind them, leaning against the trunk. Along the lower road, running into distance, a group of people wearing sandwich boards walk away from the viewer, advertising for votes. In the top right corner, a woman with a large basket of oranges is apprehended by a policeman, causing her to spill her oranges into the road.