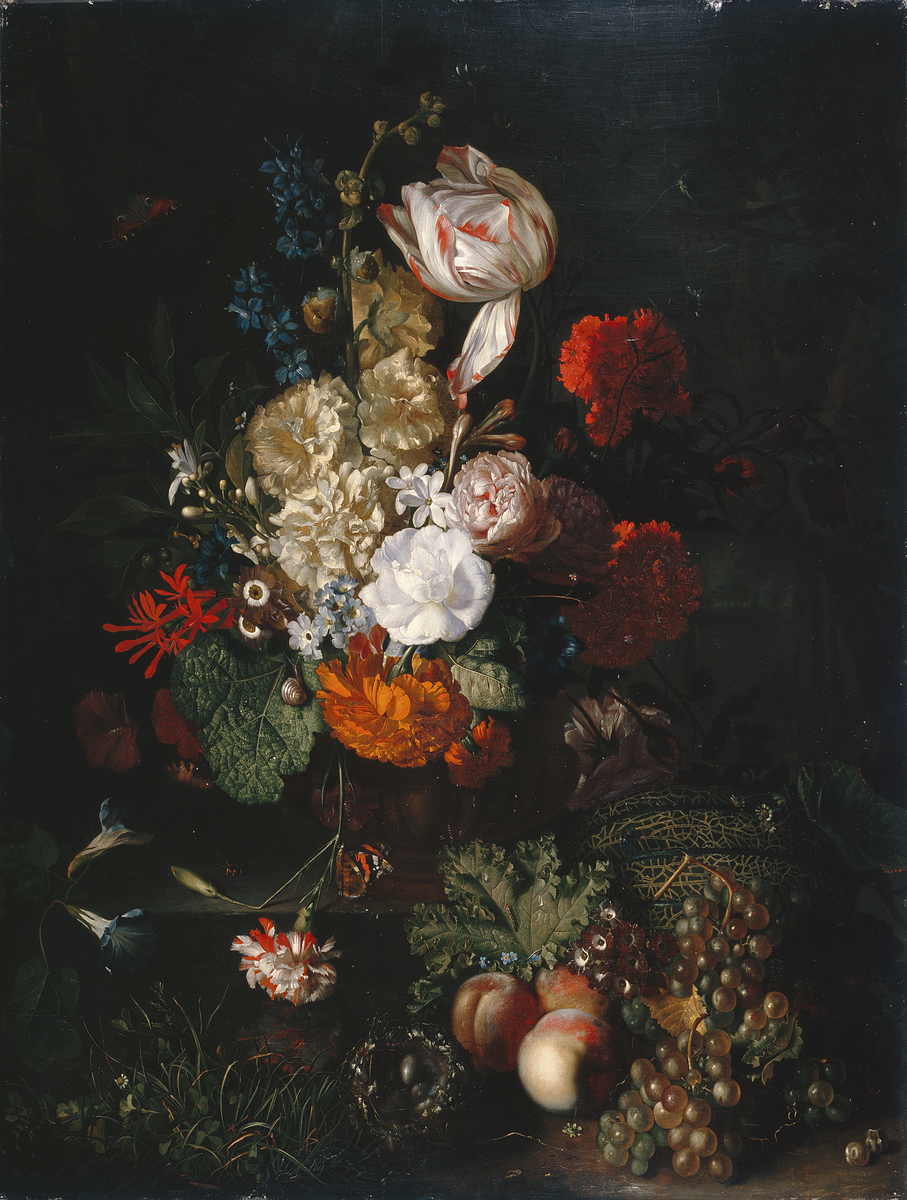 Some of the greatest scientific advances in botanical studies took place in the Netherlands from the end of the 1500s, as Dutch merchants returned home with exotic plants from all over the world. The identification of new plant species encouraged a market for accurate paintings of flowers and fruit, such as this, by Jan van Huysum. Although the individual plants were recorded from real examples of exotic cultivars, the combination of flowers is unnatural. Many of these flowers would not have bloomed together before the development of modern cultivation techniques, and Van Huysum most likely worked from sketches to create his ideal bouquet. A bird's nest is in the centre foreground, with a clump of grasses to the left that includes clover and a daisy; convolvulus creeps in at the left-hand edge. The right foreground contains grapes, peaches, a melon, primulas, forget-me-nots and a brassica leaf. The focal point is the luxuriant central bouquet that includes white and pink roses, a valuable ‘broken' (variegated) tulip, stephanotis, gentians and hollyhocks. Closer inspection reveals Peacock, Red Admiral and Small Tortoiseshell butterflies, snails, beetles, caterpillars, and dewdrops on the leaves.

Still Life : Flowers and Fruit late 1600s - early 1700s Jan van Huysum 1682 - 1749 Oil on panel Flower painting in the Netherlands began modestly with small vases of flowers painted in religious works. By the 17th century the blooms were the main subject. Van Huysum continued this tradition into the 18th century. His luxuriant bouquets echo the swirl and asymmetrical forms of the Rococo style. The artist made drawings from real flowers in season and later assembled them into a painting. He chose cultivated exotic flowers rather than wild specimens. Rare flowers were collected by connoisseurs in the same way as other costly goods. Flower painting had a moral dimension too. In the end, the scriptures warn, the life of flowers, like the life of man, is brief and over all too quickly. Assheton - Bennett bequest 1979 1979.467

Bequeathed by Mr and Mrs Assheton-Bennett.