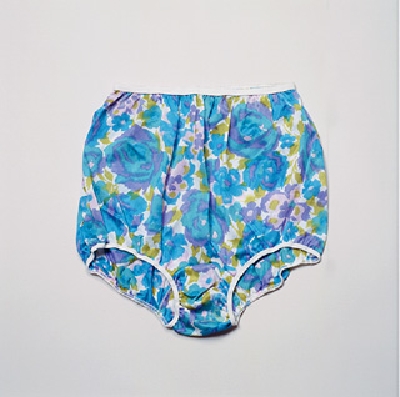 For the first time, the patterning on fashionable underwear in the later 1950s and the 1960s reflected the style of decoration current on outerwear. These brightly printed knickers are similar to the man's briefs also in this section in being made of nylon, and in having a psychedelic design of stylised flowers in bright colours. Today these knickers look extremely old-fashioned, with their elasticated waist and legs, but this was a much more novel style in the middle 1960s. More feminine, frillier styles, often in pastel coloured nylon and known as "baby doll" were also popular in the 1960s, as seen in the yellow knickers below. The psychedelic knickers were bought in the United States, but never worn as they proved to be too big and bulky when tried on. Of all clothing, underwear is least likely to be tried on for size in stores today, so this type of mis-purchase can easily happen. Museums are frequently offered unworn underwear which was found to be unsuitable when the purchaser tried it on.