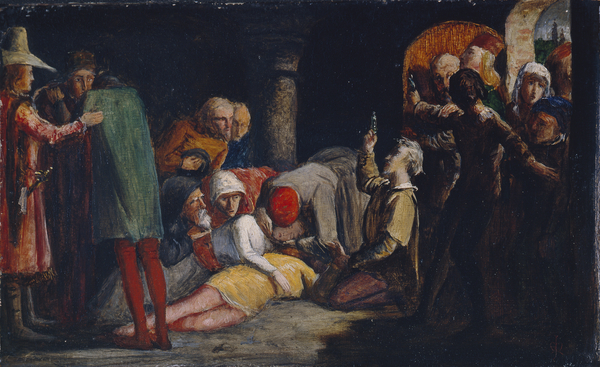 Loosely painted scene from Romeo and Juliet, depicting a moment from Act V, Scene 4 in which the lovers are found dead in the Capulet tomb. The various figure groups are arranged as a tableau, with Romeo and Juliet in the centre of the composition; the body of Romeo, dressed in a yellow tunic, is partially covered by that of Juliet, in a white gown. Five figures gather around the bodies as one of them places their hands at Juliet's throat, as if in search of a pulse; a sixth figure, kneeling to the right of the bodies, holds up a phial of poison. To the left is a group of three grieving family members. To the right, a group of figures crowd at an open door, which reveals a nighttime cityscape beyond. The entire scene is illuminated only by the open door and light cast from the outside.