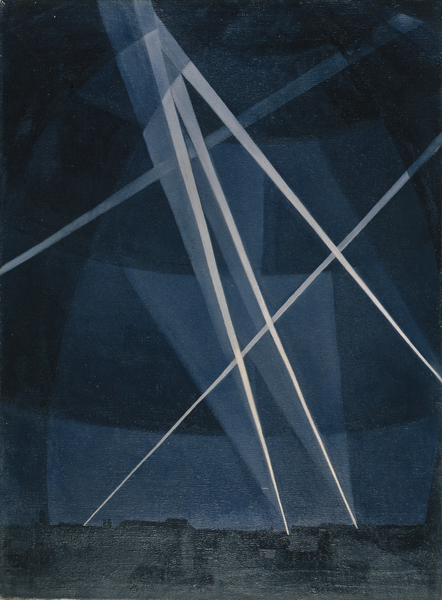 A night view of the Euston area of London during a World War One blackout, a horizon of roofs and chimneys visible in silhouette across the bottom of the picture. Sharp beamed searchlights cut across the sky above, dividing it up into a geometrical grid of dark and light tones.

Gallery text panel Tradition and Experiment Early Twentieth-Century Art 1900 - 1939. In Britain, the beginning of the 20th century coincided with the end of the Victorian age. Artists and designers experimented, challenging traditional ways of seeing and making; now trying to create a new art for a modern era. In painting, it was often traditional subject matter such as portraits, landscapes and interiors that would be tackled in new ways. The bustle and the brutality of urban life was an inspiration or something to escape from. Boundaries became increasingly blurred between design and decoration, painting and making and individual expression replaced academic authority. Art was made to be affordable and at a scale that would fit into ordinary homes. Some called the celebration of the modern into question after the horrors of the First World War. Traditional imagery was simplified or became childlike and slowly broke down into fragmented visions. Dream and chance tapped into subconscious anxieties and in 1939, world war intervened once again.

Any Wintry Afternoon in England

The Great War : After a German Retreat

Making Aircraft: Swooping down on a Taube

Making Aircraft: In the Air

The Great War : After a Push

Hauling down an observation balloon

The Great War : The Road from Arras to Bapaume

A Front Line Near St. Quentin

Barges on the Thames

Returning to the Trenches