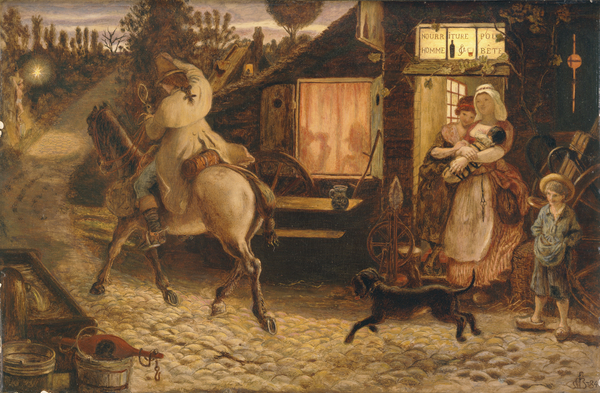 Night scene outside an inn, of traveller on horseback leaving the inn, urging his horse round the bend in the road, to left of picture, away from the viewer. In the doorway of the inn, on the right, a group of two women, one holding a baby, and a small boy see him off, a black dog runs after the rider. The woman holding the baby is wearing a red and white striped dress and a white head-dress. Her companion wears a dark dress with a pink shawl, and leans on the other. The boy stands with his hands in his pockets, dressed in short trousers, a loose shirt, and clogs. A warm glow from inside the inn silhouettes the guests sitting inside, through a square window with shutters. A glass panel above the doorway is inscribed 'NOURRITURE POUR / HOMME & BETE' illustrated with a bottle and a glass. Another house is visible behind the inn. Further along the cobbled street on which the traveller is departing, is a wayside shrine of Christ on the cross, next to a shining lamp.