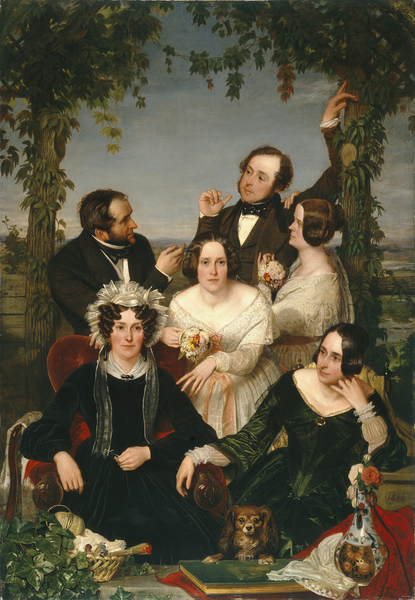 Family portrait in a garden setting of the Bromley family. Two men stand at the back of the group facing each other in discussion, each leaning against a single tree on right and left sides. In the middle of the group are two women in pale decollete dress, one seen in side profile, engaged in conversation with the men behind, the other leaning forward to face the front; both hold posies in their hands. Two women are seated at the front, the woman on the left, wears a black dress, has ringleted hair partly covered with a lace cap; she is seated facing the viewer and holds a pair of glasses in her left hand. The woman on the right wears a dark green dress, and has her right arm draped over the arm of a chair in which the other woman is sitting; she leans over to the right of her left arm, her gaze directed to the left of the picture. In the foreground, on the right, a vase with flowers stands on a low table, and in the left corner a basket is partially covered with ivy. A small dog faces the viewer in the centre, standing on its hind legs, its front legs resting on a book on the table. A rural landscape is visible in the background.